The Salem Wiki
Register
Don't have an account?
Sign In
Advertisement
in: Male, Witch, Deceased Character,
and 2 more

Alexander Corwin was a member of the Selectmen Council of Salem, Massachusetts, as well as a witch infiltrated on behalf of Mary Sibley.

Although young, Corwin is part of the selectmen in Salem. Is given to understand that this has been possible thanks to the intercession of Mary Sibley.

Shy and hesitant, leans always the opinion of others as when he has come to the defense of Mary attacked in public by Mr. Wendell Hathorne.

Alexander Corwin was an average looking young man, with dark blond hair, green eyes, and a medium build. Clothes worn by him were clean and austere, perfectly in line with the Puritan dictates, and historically impeccable.

Mary Sibley is working to include the young council member Alexander Corwin among inner circle of selectmen, to be elected magistrate in place of the late Magistrate John Hale and ensure that office to an undercover of their hive, in clear opposition to the rise to power of Mr. Hathorne. Mrs Sibley meets Corwin at the meeting house to discuss their future and how to plan Corwin's candidacy, unaware of being spied on by John Alden. Corwin, unfortunately, does not show up at The House of the Seven Gables because was captured and imprisoned by Alden, who asks him to reveal the identity of the witches of Salem. Tituba and Mary, in the meantime, perform a wicked spell and put to rest forever Corwin by linking his spirit to a ram's head to whom Tituba cuts the tongue, doing magically the same to Corwin, who bled to death. (From Within) The next morning, Corwin's body was found hanging on display to the gallows and in his mouth a piece of paper with an infamous writing. Mary Sibley took the opportunity to corner Hathorne, but the body of the deceased is carried away by the doctor. Corwin's corpse, or rather his index finger, is then stolen by Mary and Tituba from the laboratory of Dr Wainwright and used to perform a spell to guide the two witches to Corwin's assailant, believed to be a mysterious witch slayer and in order to prevent him from carry out more bloodshed. (Book of Shadows)

Average witch belonging to the Essex Hive, Alexander Corwin is one of the several witches who found themselves involved in a deadly feud ongoing in Salem. Judicious and circumspect, Corwin does not seem addicted to the dark power but rather willing to resort to the black arts only when necessary. And it's right in the head to the House of Seven Gables through dark and narrow alleys that Alexander Corwin senses danger and surrounds himself by a spell which guarantees him invisibility to escape what he perceived as a threatening assailant. Invisibility has, however, as limiting effect to not even give intangibility and it is for this reason that Corwin is discovered and rendered unconscious by John Alden. Like most witches - if not all, according to the shaman and John Alden - Corwin is susceptible to the witch dagger powers as well as to the witch's knot that keeps him tied to iron and dead wood used by Alden to hold off the witch, preventing all sorts of witchcraft. 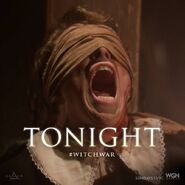