Comment the episode with us at "Black Sunday: Discussion"

"Sebastian and Alden face off to the death at Dinley’s while back at the mansion, the Boy and Anne convince Cotton to sacrifice himself in order to save humanity and Salem. Mary misplaces her trust in Anne, which leads her to be trapped inside the sarcophagus. The fates of characters such as Tituba, Hathorne, Alden, Mary, The Boy, Mercy, and more are all determined on the series finale. Some will live, many will die." [1]

Narrator: "The End is here. All Hell breaks loose on Salem's final episode."

Anne Hale: "We have been ruled by witches all along."

Dark Lord: "It would be the Dawn of a New World."

Dark Lord (to Cotton): "What would you sell your soul for?" 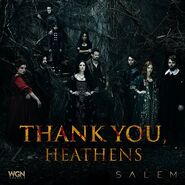 Thank you for watching Salem
Add a photo to this gallery

Retrieved from "https://salem.fandom.com/wiki/Black_Sunday?oldid=34720"
Community content is available under CC-BY-SA unless otherwise noted.