Cotton is loyal to John, Cotton defended John against his own father, They have each other's back, John is Cotton's only friend

At first, their relationship started out antagonistic, since Cotton stoned John's old friend, Giles Corey, to death for a confession of practicing witchcraft. The pair eventually joined forces to combat the witches that were terrorizing the town of Salem.

They soon developed a friendship despite their differences, to the point that Cotton defies his own father and vows to defend his friend in Cat And Mouse.

Both are firstborn sons in the new world but very little is known of their past history together. It was revealed in The Vow that they knew each other briefly as children. 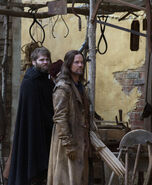 Salem Cotton urinates on John
Add a photo to this gallery

Retrieved from "https://salem.fandom.com/wiki/Cotton_and_John?oldid=33338"
Community content is available under CC-BY-SA unless otherwise noted.