Demons are a malevolent, supernatural species of beings of power found in many cultures. They differ according to species, powers, and appearance. They are believed to be emissaries of the Devil, commonly referred to as the Dark Lord, the first and most fearsome of this infernal legion.

A Demon, also spelled daemon, is a malevolent creature that is believed to be the inhabitant of Hell and is subject to the power of Satan. Probably insubstantial as ghosts, when they materialize on Earth they take on beastly appearance, as proper animals in the case of familiars, or hybrid creatures that resemble in every way to the monsters of mythology and folklore, for example, the satyr of the woods. Despite lesser demons act as witches' servants in the guise of animals, their real form has never been shown. The Devil, however, may have shown his real appearance with the man-goat likeness. Just like the Devil, their nature varies depending on the religious and cultural beliefs, but it is clear that their intentions are malevolent towards humans.

Demons are spiritual beings that are embodied in earthly guise as animals or humans or hybridizations thereof by means of spells and witchcraft. While demons as familiars seem to have a conscience and communicate with gestures with the witch, as shown by Brown Jenkins with his mistress Anne Hale, other creatures like Revenants, or reanimated corpses are a simple heap of rotting flesh animated with necromancy. While some are in need of food, others feed on the spiritual energy of the victims, such as the Specter that injure and scare its victims to death.

They are the oldest and most powerful of the demonic legions, and their origin is to be found in the angelic hosts of Heaven who have rebelled against God. While much of their potential is shrouded in mystery, their appearance seems to reflect their inner evil. The only currently known Fallen Angels have shown the ability to change shape at will, although their supposed original form is that of monstrous demihuman entities with horns, claws, and fangs of various kinds. Their number is undefined as well as their real names. A distinctive feature of these creatures is their seemingly endless knowledge of human languages, although the Old Tongue, also known as Enochian, seems to be their mother tongue. Their power is greater than that of the most powerful witches and appear to be almost impossible to kill with human weapons, as their wounds heal in a matter of seconds without causing the slightest pain, as if stabbing a puppet.

Faithful to the Devil, the Fallen Angels have suffered various punishments from God for their rebellion. The Sentinel, for example, has been entombed for thousands of years. All of them, however, share the same punishment to have been relegated to the newly created Hell.

Lesser demons are entities of the lowest classification in Hell branches made available to witches to act as servants, as in the case of Familiar spirits. Their original form is unknown and their power varies depending on the capabilities of their mistress. Immortal, they constitute an infinite amount of blood during sacrifices.

Hereinafter are listed creatures with demonic traits, but who are entirely created by witchcraft and whose power and survival is closely linked to that of the witch who created them.

Through a mild form of Dead Raising and necromancy, witches are able to temporarily bestow a vital spark in cadavers, activating them as if they were mannequins to fulfill their evil deeds. Unlike people totally resurrected, these reanimated corpses are nothing but rotting flesh animated by magic, without any consciousness or will. Those who are resuscitated or tainted by the Dark Lord's Magic retain their mental faculties and are more like monstrous cannibals than walking corpses.

A specter is a spiritual entity created with magic by the witch to scare and hurt her or his victims at long distances. They are generally creatures of female appearance reminiscent of old hag of fairy tales, with the lumpy nose, skin ruined by boils and sores, and dressed in rags. The Specter shares some powers with ghosts such as, for example, they are visible only to certain people, appear and disappear at will and are incorporeal, but have at the same time influences on the physical world.

One of the Widdershins witches looked like a monster with the head of an old woman attached to big spider legs made, however, of human skin. This monster is guarding the stronghold of Essex witches and keeps them side with horrible ways. The nature and origin of this monster are unknown because it is very different from other ancient witches of the Essex Hive, who are only very old and covered with sores but are almost human in appearance. 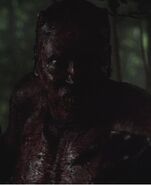 Spider-like monster
Add a photo to this gallery

Retrieved from "https://salem.fandom.com/wiki/Demon?oldid=35019"
Community content is available under CC-BY-SA unless otherwise noted.