TO DUNK A WITCH— With the arrival of the most feared witch hunter Increase Mather he begins his witch hunt by pinpointing to one of Salem's most prominent figure from Salem's most sinful district. While Mary fearing that Increase will detect that his old friend George is under a spell enlists the help of Isaac to deter him from uncovering the truth. 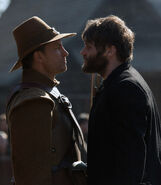 Retrieved from "https://salem.fandom.com/wiki/Departures?oldid=33535"
Community content is available under CC-BY-SA unless otherwise noted.