Comment the episode with us at "Friday's Knights: Discussion"

"The Sentinel alerts the team that Black Sunday will still go on as promised but he doesn’t have a reason to imprison them. Mary, Sebastian, Cotton, Isaac, and Alden meet up to create a plan to kill The Sentinel. Sebastian pretends to be Alden to find out Mary’s true feelings towards him. Mary heads to Tituba’s to find a way to kill Sebastian and find the red mercury. She then begins to become suspicious of Tituba." [1] [2]

Mary Sibley: "We have less than 48 hours to save Salem."

Mary Sibley: "Every one of us have played our role in this resistance. There still remains a great task." 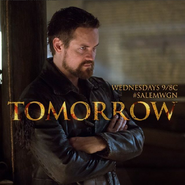 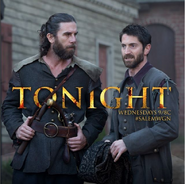 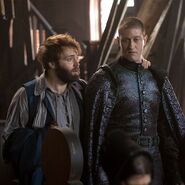 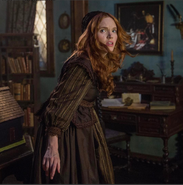 Retrieved from "https://salem.fandom.com/wiki/Friday%27s_Knights?oldid=35556"
Community content is available under CC-BY-SA unless otherwise noted.