The Ghoul was a recurring character during the first season of Salem, and also one of the Essex Hive witches' servant.

Virtually nothing is known about him, but his wretched appearance and the way he was addressed to even by witches suggest a solitary existence.

The Ghoul showed a servile and extremely submissive attitude to the Essex Witches, especially to Magistrate John Hale. His total subjugation may be the reason why this character does not speak other than murmurs, merely say a few words or names.

This poor soul has a grotesque appearance that reminds a character from a ghostly ballad. Extremely emaciated and pale, his black eyes echoes those of a beaten dog. He has long grey hair and a severe mouth. His clothes are old and stained, not so different from those wore by corpses thrown in the Crags

Throughout the Salem Serie

As Mary Sibley ordered Magistrate Hale to discover the identity of whoever interrupted their Sabbath, the man requested the Ghoul's help once he discovered that Isaac Walton was one of the intruders. After having easily abducted him from a secondary road, both the Ghoul and Magistrate Hale brought Isaac in the woods to question him. Without saying a word, the Ghoul started to paint Isaac's face with a substance similar to black coal and other unknown ingredients that caused hallucinations involving talking corpses and demons. Obtained an answer, Magistrate Hale ordered the Ghoul to fill Isaac's pockets with a bunch of suspicious witch tools and stolen items from unsuspected victims, and to intoxicate him with a lustful spell. The Magistrate's purpose was to make Isaac appears frenzy and loud, granting him a night in jail until the tool were discovered on him, leading to an accusation of witchcraft. [1]

Several nights later, the Ghoul guided Madame Mab in the woods, clearing the path with a torch and kneeling in front of Essex elders. When the witches decided to summon William Hooke from beyond the grave, Magistrate Hale ordered the Ghoul to slice Hooke's face from the corpse as it was required for a ritual of necromancy, fetching also a rabbit for the sacrifice as suggested by Tituba. [2]

The Ghoul has shown some ability to use hallucinatory ointments able to create disorientation and dizziness in the victim without having to recite spells. He also helped Magistrate John Hale in crafting a Vitae Cupido, a spell that induces a state of lustful euphoria in the victim. They used this spell on Isaac to get him into trouble with the nightwatchers when he harassed prostitutes and passersby. 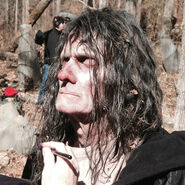 Ghoul's Prosthetic make-up
Add a photo to this gallery

Retrieved from "https://salem.fandom.com/wiki/Ghoul?oldid=35651"
Community content is available under CC-BY-SA unless otherwise noted.