Mass murder ritual to cleanse the earth for the Dark Lord

The Grand Rite, also known as Ritum Magni in Latin, is the most powerful and dangerous ritual known to witches. Although it has been attempted several times over the centuries, only the Essex Hive was able to complete it in 1692.

According to the books of Reverend Cotton Mather and the stories of past experiences of Increase Mather, the infamous witch hunter, the witches have tried many times to accomplish this dreaded ritual, but with little success. Unfortunately, the witch-hunters handbooks were written by them and, therefore, contain little information on the secret rituals practiced by the witches, deceived followers of the Devil.

A noteworthy event took place in Marburg, Germany. Increase Mather was a young and determined witchfinder intent on fighting witchcraft in the Old World. Within a month, several children disappeared from their homes and while the denizens were looking for the children, Increase acted differently. A hive of brazen witches led by a wicked witch worshipped in the guise of a Pagan Siren was one step away from completing the Ritum Magni, but were stopped in time by the witch hunter. Under the guise of an innocent child, the witch tired to deceive Increase but he strangle her. And as the life left that body, the Devil reached out and snatched the body, but Increase held on, determined that he should not return to his home in Hell. Increase's hands were plunged into Hellfire, boiling black tar that still burn after all those years.[1]

The Ritual calls for a long preparation. First, it requires a particular astronomical event that happens once across centuries. Then the Ritual claim the ritual murders of thirteen innocent victims in an annual lunar cycle, which ends with the Hunter's Moon, the blood-red moon of the month of October. The blood of the victims should cleanse the ground, so that it is prepared to bear the cloven hoof of the Devil.

No matter how these victims are killed — hanged, burned, pressed — as long as its done in the stipulated time frame. Learning from the witches' past failures, Mary decided to let the Puritans themselves commit the murders rather than risk the witches being caught in the act and stopped. [2] This initial phase is the most delicate because if the thirteen victims are not killed in time, the whole ritual will be rendered void. Another way to prevent the Grand Rite is to kill the witch who started it. Cutting off the figurative serpent's head will thwart the Rite. Immediately after the thirteenth sacrifice, the holy relic known as “Malum” is to be buried in the Witch Tree, spreading a plague which will decimate humans consecrating the ground for the rise of the Beast.[3]

Victims of the 1692 mass sacrifice

Were the witches able to complete the perilous and detailed phases constituting the Grand Rite, they would be able to host the Devil within a Vessel, leading humankind to undergo a Great Terror under his reign. To do this, the chief witch must perform the Consecration, spreading a deadly plague that turns corpses into wells of hell-blood.

An Initiation to the Grand Rite

The Ritum Magni consecrates the Earth for the Devil's return, to pave the way for his eventual incarnation. A pure white dove is impaled as a tribute. Thereafter, a blood sacrifice of thirteen innocent souls must be made before Full Hunter's Moon.

The Consummation of the Grand Rite

Cotton Mather: "You witnessed a real witches' Sabbath. Something no witch hunter has ever seen with his own eyes. All of our images and accounts come from confessions, some rather more believable than others."
John Alden: "It's this one."

Mary Sibley: "You thought love would be my undoing, that I would be in the woods with my lover, and you would kill me there without a trial, thus ending my Grand Rite. I will share with you the secret that you and your kind have sought in vain for centuries! Innocent blood and when the last is spilled, our Malum opens, unleashing the red death it contains within it. And yet, not once in the last 500 years have we succeeded. Until I came along and realized we needn't spill a single drop of innocent blood ourselves. Not when we had fearful and fanatical puritans all too ready to do it for us. So you gave us Giles Corey, Bridget Bishop, the Barkers and others and of course, those poor, deceived girls innocent blood by the buckets. And now here we are, night of full Hunter's moon, and only one more required before moon fall."
— All Fall Down
________________________________

Mary Sibley: "I alone succeeded where you failed. Oh, mighty queen of failure. I completed the Grand Rite and I alone will open the gate for our Dark Lord. This is my accomplishment and none of your own."
Countess Von Marburg: "No, that's where you are wrong, little sister. Your accomplishment is not only my concern but my destiny."

Mary Sibley: "Then let us use this common threat as reason to unite. What difference does it make who holds the key and who opens the gate? All witches will benefit from our Dark Lord's arrival. Let us work together in this noble cause." 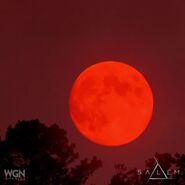 victim of the pox

Community content is available under CC-BY-SA unless otherwise noted.
Advertisement