Reverend Increase Mather was a formidable Witch Hunter and father to Cotton Mather. After burning scores of witches in Essex and hindered the Grand Rite headed by a Pagan Siren in Germany before Cotton was born, Increase Mather proved to be a major obstacle to Mary Sibley's plans, and then the solution to them.

Increase was a recurring character portrayed by Stephen Lang.

Increase Mather was once one of the most famous and cruel witch hunters from both the Old World and the New World. He was the cause of death of thousands of witches throughout Europe, including the wicked German witches, those in Essex and much more. Once refused to condemn classmate for witchcraft and this man years later sacrificed two virgins girls in a satanic ritual.

In an unspecified year, he had prevented the success of the Grand Rite by German witches killing their main vain witch, who had taken possession of a six-year-old girl.

Increase Mather was a despotic, cold and violent man. He's one of the most famous and cruel witch hunters, prone to the use of torture and violence, both physical and psychological. Blindly convinced of his beliefs and his cause that doesn't allow anyone to contradict him. His temperament was not softened even with his son, even worse.

Increase Mather was a man at the end of the fifty, austere, with greying hair almost white, a sparse beard and an athletic physique for his age. Increase Mather was always wearing gloves on his hands because his hands were blackened by Hell's fire while strangling the life out of a six-year-old girl whom he believed to be possessed by Satan in the witch trials of the German witches. Wearing a cilice tight to his chest as a sign of repentance for his sins.

Increase Mather was a formidable witch hunter, experienced in the most atrocious and perverted forms of torture, for the purpose of extorting confessions even to the most reticent witches. He had a vast knowledge of the literature on witchcraft, although it is possible that he has been exceeded by his son Cotton Mather, as the latter was less narrow-minded than Increase.

As a Puritan Reverend, he was a very skilled orator, able to manipulate large masses of people with his sermons and speeches. Skilled in combat, despite his age, Increase strength and skills are noteworthy, especially considering the fact that he almost always wore a cilice, tight around his chest.

A destructive relationship in which the despotic father has canceled almost completely the self-esteem of the child. Increase dreams for his son an illustrious political career, driving away from Cotton's way what he thinks is not good for Cotton. Increase sent away from Cotton, in fact, his lover Gloriana, burns his books and makes throwing trinkets and bizarre tools used by Cotton in his research and experiments, leaving the entire room a bed and a Bible.

Mary & Increase
An old friend of George Sibley's, he is the head of one of the founding families of Salem and a formidable witch hunter. He returns to a Salem because of his son's failure to eradicate the witches. Not much is known about their past history but it is presumed they knew each other before Mary married George. When Increase returns he sparks real fear in Mary who tries to send her husband away to Boston to prevent him from discovering his friend is under a spell but her plan fails and Increase takes George under his care (Departures). He later becomes suspicious of Mary and falsely arrests John Alden of witchcraft as bait to lure Mary into revealing she is a witch (The House Of Pain). Mary kills him as the final and thirteenth sacrifice to complete the Grand Rite after she saves John (All Fall Down).

Increase Mather: "Let them no more say “God must do all”, and so encourage themselves to live in a careless neglect of God and of their own souls of salvation! The Devil has made a dreadful knot of witches in the country, and, by the help of witches, has dreadfully Increased that knot. Oh, children, children, be afraid, and go not prayerless to your bed lest the Devil be your bedfellow."
— Children, Be Afraid
____________________________

Increase Mather during a sermon

Increase as a ghost
Add a photo to this gallery 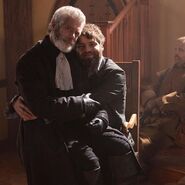 This or That with Stephen Lang- AVATAR vs. SALEM

Salem - The Most Feared Witch Hunter

SCENES FROM SALEM Episode 7 -- Witchhunter on the Ship

SCENES FROM SALEM Episode 8 -- Mab in the Dunking Chair

Retrieved from "https://salem.fandom.com/wiki/Increase_Mather?oldid=35611"
Community content is available under CC-BY-SA unless otherwise noted.