John Hale was a magistrate and also the chief policeman in Salem, thus being one of the town's selectmen. John Hale was a Cradle witch from one of the oldest bloodlines who crept into high public position to destroy the Puritans from the inside.

He was portrayed by American actor Xander Berkeley.

As he told his daughter Anne, he was a witch by birth and as a child in Europe, he saw his parents burned alive by Witch Hunters. Welcomed by the survived Essex witches, he emigrated to America coming to Salem where he joined the cause of the witches of the New World to bring Hell on earth.

John Hale was an experienced and navigated traveler, with a calm, but manipulative personality, always ready to consider possible outcomes before embarking on an attack. Very protective of his family, John Hale believed in his cause and was determined to carry on the Grand Rite to avenge the abuses suffered by his family. Repeatedly opposed by Mary Sibley's resolute personality, however, he was a faithful fellow witch of the Essex Hive. Although he was a Cradle Witch, he did not seem to have any particular prejudices against so-called "contract witches," as he showed himself willing to give way to Mary Sibley and the Essex witches to lead the Grand Rite.

John Hale was a tall, well-proportioned man, with white shoulder-length hair, often tied with a black satin ribbon. Because of his job and his social status, he was wearing dark, and elegantly sewn clothes. Several times he was seen wearing a wide-brimmed hat.

In 1685, Magistrate Hale was the only one, along with John Alden, to express disappointment because of harsh punitive methods of Isaac Walton and Abigail Coook employed by George Sibley, head of selectmen. Seven years later, when the fear of witches was poisoning the minds of the citizens also through the intercession of Reverend Cotton Mather's sermons, Magistrate Hale was one of the few who sought rational explanations, because according to him a witch hunt would only have caused further economic and social problems to the town. To trouble him, instead, were Indians and French attacks, as he said at a dinner hosted at the House of the Seven Gables by Sibley and Mrs. This hesitancy to give rise to the witch-hunt was secretly moved in reality by the fact that the same Hale was a witch, in league with the very Mary Sibley and other undercover witches to take down the Puritans once and for all. [1]

As the witch panic spread, Magistrate Hale found himself increasingly powerless to contain the impact to a minimum, especially when his daughter Anne voiced his disappointment at not having done anything to prevent the hanging of the midwife Bridget Bishop, her friend. Meanwhile John Hale was also busy with the task entrusted to him by Mary Sibley: discover the identity of those who had disrupted the Sabbath in the woods. To do so he went into the woods to see Petrus, a local seer holed up in the dense forest.[2] Once John Hale discovered that Isaac witnessed the Sabbath, he abducted him with the help of the Ghoul bewitching him so that Isaac was accused of witchcraft by having bewitched tools found in his pockets. [3]

Despite being a descendant of an important bloodline of witches, as deemed by Tituba, John Hale is a witch who rarely resorts to his powers for personal gains, basically using subterfuges to achieve a goal. John Hale proved to master his own witch powers since childhood when, following the death of his parents, he killed the judge by moving a dagger with the power of his mind, and from a quite considerable distance.

The distinctive feature of John Hale's witchcraft is certainly teleportation, a variation of projection obtained through a disturbing mask that resembles his facial features, and conventionally referred to as “Traveler's Mask.” Through this enchanted object, he is able to move physically through great distances focusing solely on the power of his will. Although this power is activated through the use of a ritual object, it is noteworthy that John Hale might be the creator of the mask, and therefore he has been able to infuse into it peculiar supernatural abilities.

John Hale is also a connoisseur of traditions and witchcraft from the Old Continent, collecting interesting tribal artifacts in his own house. His knowledge also extends to herblore and potion brewing, as demonstrated by the use of Valerian Root as a deterrent against harmful witches, used as a protection for his daughter inside a locket, or the poison given to Mrs Sibley and Mab to ensure their death.

John Hale kept notes of his journey into Witchcraft in a beautifully-bound Book of Shadows. The contents of the book were visible only to him, or to those who could get John's blood to stain the pages, thus revealing the text.

John Hale had a difficult relationship with his daughter, mainly because of their opposite character. While John was calm and thoughtful, trying to act as he thought fit, he was hardly able to tolerate his daughter's exuberance, fearing for her inclination at a time when their kind was highly at risk. However, John was a loving father who placed his daughter's future in the first place, providing her with a life of comfort and convenience. Their main friction was due to the fact that Anne suspected her father's reasons. Her suspects were proven to be true when he confessed her to be a witch. Revelation that escalated to the point of his violent death when Anne was forced to accept that she was a witch too.
John had a happy marriage with his wife, providing the needs of the family in the best way. Their marriage was solid and based on the trust of each other as well as in sharing their secrets. Not strangers to domestic arguments, Mr and Mrs Hale were one of the wealthy couples in town. Despite his many secrets, Mrs. Hale seemed to tolerate her husband's transgression and even his sorcery as long as he provided for their family and, most of all, for their daughter Anne.

The conflicting relationship between John Hale and Mary Sibley arose from their different upbringing and world view, simplistically described as Old vs. New World. Because of the deep and traumatic losses he had suffered since his youth, John Hale was always very worried and reluctant to Mary's instinct and recklessness. Nevertheless, John Hale recognized Mary's intelligence, wit and temper as perfect qualities to carry out their plan of revenge against the Puritans and celebrate the Grand Rite for their Dark Lord. They often found themselves on opposite sides of the chessboard during the witch trials, since each of them tried to defend their loved ones from the carnage and had different ideas when it came to drawing the next victim. Furthermore, John Hale did not fail to comment sarcastically on some of the woman's choices, considering them weaknesses dictated by her love for John Alden and by his own admission, John Hale had never been fully convinced that Mary would be able to finish the Great Rite.
John Hale had a certain disdain for the war veteran, Captain John Alden. This hostility came from the fact that Hale considered Alden a threat to their plan, as he was the weak spot of Mary Sibley, meaning a possible disruption of their vangeful plan against the Puritans. For this reason he had tried several times to get rid of Alden, who harbored the same disdain and mistrust towards him. The hostility towards Alden grew when Anne Hale began to develop a love interest for the Captain, arousing paternal jealousy in John Hale. However, John Hale recognized the qualities of the Captain, including his experience and prowess in battle and life in the wilderness, as well as his knowledge and familiarity with the indigenous tribes.
The relationship between John Hale and Cotton Mather can be summarized as hostile, since the witch harbored justified hatred of the witch finder. The Magistrate also had little regard for the physical and intellectual abilities and faculties of the young Mather as he repeatedly pointed out to Mary Sibley when the reverend was about to commit another of his errors dictated by the zeal and blind conviction of doing the work of God. However, it was precisely because of this underestimation of Cotton Mather that John Hale had decided to use him as a pawn during the Salem witch trials, preferring an inept witch hunter to his infamous and dangerous father, Increase Mather. Since Magistrate Hale was not a fool, he and his wife had decided to marry Cotton Marher with their daughter, Anne, in order to secure the prestige of a famous Puritan family and to conceal their witch secrets.

Magistrate Hale had high regard for Tituba and their knowledge dated back to when she was just a child, sold from hand to hand after being transported on a ship by colonizing slavers. In fact, it was John Hale himself who led a young Tituba to Salem and sold her to the Walcotts so as to lay the first foundation for a diabolical plan. While John Hale harbored suspicions about the reckless personality of Mary Sibley and her ignorance of the Old Ways, he had no doubt about Tituba's vindictive desire against the Puritans, and to be able to count on her for help and advices within their circle.

John Hale had a sexual relationship with the Madame of the Divining Rod, where John Hale used to spent his evenings with her and enjoying other prostitutes whilst also carrying out tasks for the hive and discussing their unfolding plan to get rid of the Puritans. Both elders of the Salem witches, John and Mab had an indissoluble bond that broke when Increase Mather arrested Mab on charges of witchcraft. Rather than seeing her friend die at the hands of the witch hunter, John Hale provided Mab with poison.

Magistrate Hale: "For God's sakes, Sibley! The stocks and the lashings are punishment enough!"

Magistrate Hale: "There could be nothing worse for Salem, for the country, than a witch hunt."

Magistrate Hale (to the Ghoul): "Does your great Mary know what it is to watch witches burn? Nothing of the Old Ways while she's whipping us toward the new."

Magistrate Hale: "And what of the Grand Rite? You wanted another victim, and now you have one. Tick-tock, Mrs. Sibley. The next moon fast approaches."

Magistrate Hale (to Mrs. Hale): "I never understood it before how my parents could send me away. What could be worse than being apart? Certainly not death. Now I know. A parent will do anything for the life of their child."

Magistrate Hale: "I am one man. Perhaps you expect too much of me."
Anne Hale: "Perhaps you are content with too little."

Magistrate Hale: "I was eight years old when I watched my parents burn."

Magistrate Hale (to Anne): "Do you know what it's like to witness the death of those you love more than anyone else in the world?"

Hale's Book of Shadows entry (to Anne): "Perhaps I was mistaken in keeping this all from you, but I dreamed I could save you from your fate. Now the lessons I should have taught you, you'll have to learn without me. But my heart and love are with you always. Know that you are not alone." 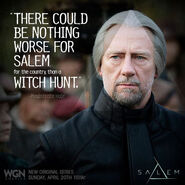 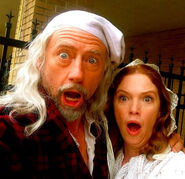 Aiden Flowers as "Young John"
Add a photo to this gallery

Retrieved from "https://salem.fandom.com/wiki/John_Hale?oldid=35614"
Community content is available under CC-BY-SA unless otherwise noted.