Cared for each other, sexual relationship, He knew she was a witch, he wanted her to teach him witchcraft.

Seperated (Samuel is trapped in hell)

The relationship between the Salem witch Mary Sibley and Dr. Samuel Wainwright.

Mary and doctor Wainwright know shortly after the arrival of man in the city and now seem to get along. She sees him as one of the few allies against misogynist selectmen who would usurp her command over the town

Throughout the Salem serie

In Cry Havoc, the two met in Church, when Wainwright makes her entrance mocking of Mr. Hawthorne's theories of divine punishment. Mary is immediately attracted to the doctor, who's so different from the Puritans. The man, in fact, is determined to find a rational cure to the plague and for a couple of times they flirt in a veiled way, as when the doctor compares Mary to a juicy unexplored wilderness hidden from respectability. In Blood Kiss, TBA In From Within, after a visit to the makeshift hospital, the doctor introduces mary in his private rooms, where the woman has the opportunity to observe the designs of man and his morbid equipment on the study of death. Here Samuel reveals to Mary his passion for death and introduces her to his sexual fantasies, puts his hands on Mary's neck bringing her almost to death to let her experience the thrill of life.

In Book of Shadows, the doctor is examining the corpse of the late selectman Alexander Corwin when Mary comes to his lab. During the autopsy, Samuel has an interesting encounter with Mary, urging her intimate parts with his hand. Their "meeting" continues to Sibley's house, where the two have their first sexual intercourse.

In The Beckoning Fair One, Samuel attending the dinner at Sibley's house, but is overshadowed by Sebastian Von Marburg who brazenly wooing Mary.

In Dead Birds, after arriving at the conclusion that Mary is a witch, even the witch responsible for having unleashed the plague, the man asked her to teach him witchcraft.

In Wages of Sin after the revelation that Mary is a witch she tells him that he must destroy all evidence of her witchcraft if he wishes to continue with her teachings and he destroys his life work and the Malum by burning them. Later he visits Mary and finds her in the company of Sebastian Von Marburg, she tells him that the baron is one of them and can be trusted and allows the baron to take him to the crag to continue his Initiation knowing he may be sacrificed or harmed. 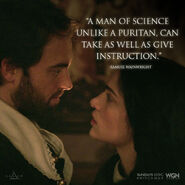 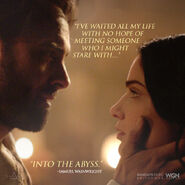 Retrieved from "https://salem.fandom.com/wiki/Mary_and_Samuel?oldid=20892"
Community content is available under CC-BY-SA unless otherwise noted.