Raised together as children, Tituba turned Mary into a witch, Kissed, Tituba has romantic feelings for Mary, Tituba betrayed Mary, Tituba kept the existence of Mary's son from her

The relationship between Salem's witches Mary Sibley and Tituba

Originally the relationship between the pair was as close as sisters. Tituba was bought by the Walcott family when she was only a child and was treated with kindness especially by Mary.

When Mary discovered she was pregnant with John Alden's baby she helped the young Mary sacrifice the child to Satan turning her mistress into a fellow witch and becoming her most trusted accomplice and ally with her quest to complete the grand rite.

Tituba is shown to care very deeply for Mary and becomes jealous of both John Alden when he returns to Salem and Mercy Lewis. When Tituba is arrested and tortured by Increase Mather in Departures she accuses John Alden of witchcraft inciting Mary's hatred.

In All Fall Down when Mary discovers the child she sacrificed is, in fact, alive and that Tituba had known this she vows to make her pay.

As a child, Tituba was bought by the Walcott family and became very close to their daughter Mary and spoke of the kindness she showed her in their childhood. When Mary discovered she was pregnant with John Alden's baby it was Tituba who helped her sacrifice the child to Satan turning her mistress into a fellow witch.

Mary: I know well my duties. Attend to your own.
Tituba: Your duties and seeing that you fulfill them is my duty, like it or not.
—The Stone Child

Mary: The next lie to cross your lips will be your last
Tituba: You would threaten me, your one true ally
—Lies

Tituba: I would do anything for you. I love you
Mary: I wish to god you didn't. Love me less and you will love me better.
—The Red Rose and the Briar

Tituba: She is unreliable. It is only a matter of time before we can no longer control her.
Mary Sibley: At a time such as this when I am nearer to discovery and annihilation than ever before, you would distract yourself with petty jealousy and spiteful accusations.
—Children Be Afraid

Mary Sibley Hear me well, foul creature. You have manipulated me for the last time. I will complete your grand rite. But when it is done, I swear to you, you will pay.
Tituba We must all live with our choices, Mary. You know that best of all.
—All Fall Down

Mary Sibley You were my friend!
Tituba Was I? Or was I never anything but your property?
—Wages of Sin 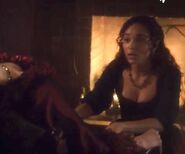 Retrieved from "https://salem.fandom.com/wiki/Mary_and_Tituba?oldid=33064"
Community content is available under CC-BY-SA unless otherwise noted.