Mercy Lewis is the daughter of Reverend Lewis, plagued by Spectral attacks and exploited by Cotton Mather to discover the secret identities of the witches. Mercy is actually under the control of Mary Sibley, who uses Mercy to point out chosen victims for sacrifice. Tired of being exploited, Mercy turn to witchcraft as a means to take revenge for the wrongs suffered and proclaims herself the protector of the outcasts. Mercy's thirst for revenge and a desire for power lead her to clash with other powerful witches in her path, resulting in a fatal outcome.

Mercy is a major character portrayed by actress Elise Eberle.

"Mercy Lewis was a girl with strange afflictions done by an unknown tormentor, who is later revealed to be none other than Mary Sibley. She later becomes a witch and swears to get revenge on Mary for all she has done."[3]

"Mercy has found her calling running the brothel and starts an unlikely partnership with someone in Salem which turns into a love affair."[4]

Mercy is the daughter of the Reverend Lewis, forced to a strict education as it relates to the Puritan thought. At some point around 1692, she is chosen by Mary Sibley as host of her familiar and forced to feed the evil creature on behalf of the witches.

Mercy is an unassuming girl with a friendly, trusting disposition that also allows other characters to take advantage of her; she trusts Mary Sibley, which enables the latter to plant a familiar in the form of a black snake inside her body; she trusts her father and the priest each time they minister to her, even when her father takes a knife to slice her belly; and she accepts a private audience with Mary even after having discovered she is the one tormenting her.

Mercy also appears to be a naturally kind person who is visibly pained by the role she unwillingly plays in Mary's plan to turn Salem residents against each other, and at one point fights off Sibley's spell at a great physical strain to herself rather than accuse another innocent of witchcraft.

The torments endured radicalized Mercy into a sadistic and vengeful witch. Her obsession for revenge, as well as the belief that the world owes something to her, are the trigger for her bitterness and malice.

Clearly once a well-rounded teenage girl with plump rosy cheeks and golden hair, Mercy Lewis could very well have been the picture-perfect "village belle" if not for the scars she now bears from her prolonged torment at the hands of witches. Her hair was cut short as symptoms of her possession worsened, and her body has grown weaker both because of the toll possession and harboring a familiar has taken on her and also because of her confinement under the orders of her well-meaning but occasionally misguided family and priest. At the peak of her torture, her skin develops an unhealthy pallor.

In retaliation to her challenge to Mary Sibley, Mercy and her outcast followers were shot and burned alive. Mercy, however, survived, albeit with painful and extensive burns all over her body. Following her partnership with Countess Von Marburg, Mercy regains her beauty, even regrowing her hair in short curls, by draining and bathing in a girl's blood to wash her burns. However, Mercy later angers the Countess Marburg, who undoes some of the healing magic, leaving Mercy with red eyes and burns on her skin.

Upon her initiation into witchcraft, she was taught several basic rituals by Mary Sibley, such as the one to enter a state of astral projection, which she showed considerable skill in, going so far as to be able to temporarily possess her target, who despite resisting was killed by Mercy. She was also able to craft a short-lasting illusion using a potion while playing a game with other girls. After betraying both Mary and Tituba, she rebelled against the Essex Hive, though her power continued growing naturally as she was quickly able to teleport, fleeing from Mary in this manner. She was also able to change the shapes of her fingers into animalistic nails, which she achieved through sheer will without any assistance. Mercy eventually learned how to levitate, using this either in fights or when she broke in to help her followers.

Unlike the previously seen use of familiars to control humans by forcing them to ingest the familiar, Mercy learned how to use her familiar bird to control men, by castrating them and sowing in the head of a bird in place of castration, showing skill in witchcraft as she possibly thought of this practice herself. Before this, she also assumed control over Tituba's familiar using her followers in a calculative move, forcing the familiar spider to seal George Sibley's mouth shut, which led to Tituba's arrest, along with Mercy's accusation.

Mercy was also aware that consuming a dying man's flesh would bind their spirit to her will in death, which is something she possibly learned from Mary. One of the most significant techniques she was taught in is the practice of Blooming, bathing in the blood which is a sophisticated practice used by powerful witches such as the Marburg bloodline. It was, in fact, the Countess Marburg who taught Mercy the art of blooming in the first place, healing her scars and regrowing her hair in the process. She also showed herself capable of invisibility, though whether it was achieved through a spell, ritual or potion remains unknown. Like other witches seen, Mercy has demonstrated a greater durability than human beings, easily surviving a knife in the chest. She also while horribly burned survived the fire that killed all of her followers.

Mercy was possibly one of the more powerful witches of the Essex Hive, growing quickly in power on her own and currently residing in Salem.

Not much unknown of their past history other than that it was Mercy's father that had wed Mary to George Sibley so it is presumed Mary knew or knew of Mercy before she placed her under her spell. Mercy was used to accuse those of witchcraft but after she was freed from the familiar within she was no longer under Mary's control so Mary turned the young girl into a Witch to prevent her from revealing what she was (The Red Rose and the Briar). Mercy soon developed a strong attachment to her as Mary took her under her wing, teaching her the craft. When Increase Mather arrived in Salem and became suspicious of Mary, Mercy accused Tituba of witchcraft to protect Mary but was later forced to go into hiding after Tituba revealed Mercy was now a witch herself. Together they tried to kill Increase but their plan failed (Cat And Mouse) and after the deaths of Mercy's friends who had been arrested and tortured by the senior Mather, Mercy vowed vengeance against Mary as she had promised she would protect them (Ashes Ashes).

The relationship between Mercy and Tituba was non-existent up until Mary turned Mercy into a witch (The Red Rose and the Briar). At times their relationship was antagonistic due to Tituba's possessiveness of Mary and their relationship finally came to a breaking point when Mercy cast a spell to gain control of Tituba's familiar to silence George Sibley to protect Mary from Increase Mather. She later accused Tituba of witchcraft leading to her arrest and torture. Tituba enacted her revenge on the girl by telling Increase that Mercy was now a witch, forcing Mercy to go into hiding.

A relationship born when the two were children and deepened during adolescence when both begin to take their first steps in witchcraft. The two, however, have a different view of their feelings because Mercy accuses Dollie of having always mistreated her, feeling superior to her in both beauty and social status, and eventually killed her friend, declaring her a betrayer.

A relationship born as an exchange of favors and that is over to become yet another disappointment for the poor Mercy. Mercy looks at the Countess as a model to aspire to, the quintessence of the Witch while for Countess Von Marburg Mercy is only a rough Essex witch, nothing more than a means for her purposes.

The turbulent relationship between these two witches is based on sexual attraction to her and from disgust and jealousy by him. Sebastian is jealous of the relationship that Mercy has with his mother and when she tries to have sex with him, he taunts and insults her.

Mercy and Magistrate Hathorne began a deviant role-play that resulted in a long term relationship, crowned with a marriage celebrated by Cotton Mather himself at the Bird's Nest.

Mercy Lewis: " Let the little children come unto me, for the kingdom of the Devil belongs to them. Come, sit here, poor boy. Poor, sweet boy. Worked to death by your family. Every day of your life, making you unfit for burial in the churchyard so they dumped you here. Alice, died in childbirth, pregnant from your mother's brother. There! There, the baby! Smothered to hide the evidence. Let mother and child be together. I am your mother now. All of you! And you all are my children."
— Ashes, Ashes
__________________________ 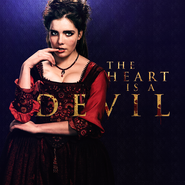 A severely burned Mercy Returning home after resurrecting herself 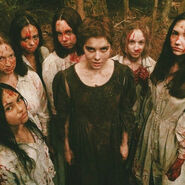 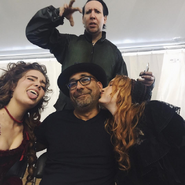 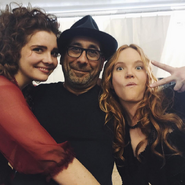 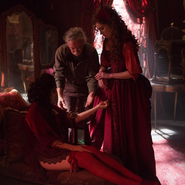 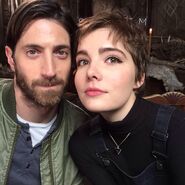 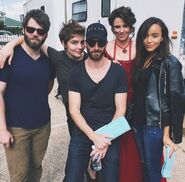 SECRETS OF SALEM- The Evolution of Mercy

SCENES FROM SALEM Mercy and Cotton

SCENES FROM SALEM Episode 4 -- The Marketplace

SCENES FROM SALEM Episode Five - Mercy in the Market

SCENES FROM SALEM Episode Six - Mercy and Mary in the Woods

SCENES FROM SALEM Finale -- Mercy in the Woods

Salem- Behind the Scenes Mercy

Retrieved from "https://salem.fandom.com/wiki/Mercy_Lewis?oldid=35604"
Community content is available under CC-BY-SA unless otherwise noted.