Hut in the woods of Salem

Petrus, most commonly known as The Seer, was a gifted cunning man. [1] He lived deep in the woods preferring the company of his familiars than his own kind. Poor and blind, he used his familiars as his eyes in the woods so nothing will go unnoticed by him.

Petrus was a recurring character in Salem portrayed by Christopher Berry.

"Petrus is quite blind and he can see through the eyes of his animal companions. What we know about Petrus is he does appear to have some powers, a witch sort of view. Petrus is a cunning man, which is an actual thing from early Middle Ages up to the 18th century. They were who you'd come to if you wanted a love spell, let's say. Or if you want to combat a witch, or find a witch you would consult a cunning person to help you identify them. Petrus is helping the witches. Is not necessarily clear whether he's doing it because is compelled to or because he has his own agenda. He is more than meets the eye."[1]

Virtually nothing is known about his early life, but we know that his dream is to go to the South. According to Tituba's words, Petrus owes her his loyalty.

Petrus was an eccentric and free-spirited individual who strongly valued his privacy in the woods, accompanied by his familiars and various other animal companions. In spite of the fact that Petrus was not a witch, he commonly acted as an emissary to the Essex hive. Petrus explained to John Alden that he also provided help to the Indians on occasion. Nevertheless, Petrus was his own man who offered help to whoever sought him out. He expressed to John Alden, that he did not side with the witches nor the Puritans nor the Indians; referring to himself as a "circle without sides".

Petrus was a man in his thirties, with blonde hair styled in a similar way to some Indian tribes. The eyes were very blue clear so as to suggest that he was blind and who see through the magic. He also has a badly shaved beard and worn clothes.

Throughout the Salem Serie

In The Stone Child, Magistrate John Hale went to the cabin in the woods so that the seer Petrus discover the identity of the person who has broken the Sabbath's circle. The witch then takes the lizard and after having engraved its eyes, let the blood drip into a bowl of glass full of water in which the blood floats until it took on the appearance of Isaac Walton and John Alden's faces.

In In Vain, TBA

In The Red Rose and the Briar, the seer is visited by Tituba and the two have an altercation that Tituba has or has not power over Mary. Petrus fact saw Mary in the woods with Mercy practicing the ritual to create a new witch.

In Cry Havoc, Petrus is approached by Mary who asks him to use clairvoyance to find John Alden.

In After the Fall, his spirit approached a blinded Tituba and he helps her by guiding her to his cabin within the woods, there's where he tells her the great burden of the sight and showed his vision about the downfall of mankind.

As a cunning man as well as a seer, Petrus was a divination expert and an excellent clairvoyant. His powers were connected to the stuffed animals stored in his hut, which were similar to a witch's familiar, except that they were creations of his own cunning craft instead of gifts from the Dark Lord. He could use those stuffed animals in a variety of ways, such as when he needed to have eyes everywhere, or for self-defense, or to receive visions. Given how, after his death, his spirit wandered within his cabin in the woods instead of moving on into the Afterlife, he must also have some powers over the Nether Worlds.

Besides this, Petrus was a connoisseur of herbs, barks, and roots, and so could prepare poultices and concoctions nearly powerful enough to equate witchcraft. Last but not least, Petrus was an expert of paths and tracks, and could move undisturbed in the woods, crossing them without leaving any trace or making any noise. His extensive knowledge of the area, along with his skill in tracks, allowed him to reach any destination and, when used in conjunction with his clairvoyant skills, he could easily track anyone down. 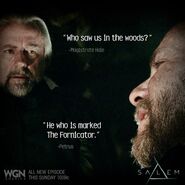 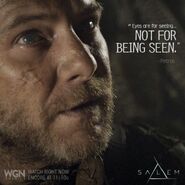 Retrieved from "https://salem.fandom.com/wiki/Petrus?oldid=35612"
Community content is available under CC-BY-SA unless otherwise noted.