A large wooden building that consists of a large room housing benches for wealthy citizens (the poorest people standing between the entry and the back rows of benches), a pulpit carved in precious wood from which the Reverend does his sermon and at the pulpit's sides there are benches on which the selectmen sit during processes and important meetings of the community. This colonial meeting house is the focal point of the community where all of the town's residents could discuss local issues, conduct religious worship, and engage in town business.

The focal point of Salem community, the church became the stage of the long and fervent sermons of Reverend Cotton Mather, who arrived in town to take care of a suspected possession phenomenon and that led to a hysterical witch hunt. The community meeting with the selectmen took place at Salem church, giving voices to a different opinion on proceeding with a real and systematic witch hunt, which will only bring problems according to Magistrate John Hale. Panic urged by zealous provocations of Cotton Mather, however, have caught on and even the arguments of veteran John Alden war manage to appease the masses. (The Vow)

While Mary Sibley and her witches were plotting secretly, manipulating the fate of the accused to their advantage, Reverend Cotton Mather decided to hang Mercy Lewis on one of the beams of the church, so that he could not be a danger to herself, while continuing to act as Witchfinder. It was during the trial of Bridget Bishop that the church was the site of a horrific spectacle: Mercy vomited blood and nails on the accused, making it clear in the eyes of the terrified crowd the evidence that midwife Bishop was a witch, resulting in her hanging. (The Stone Child)

When Increase Mather came to Salem, it took very little before the man began to lavish from the pulpit even more strict and zealous sermons and accusations than those of his son. (Departures)  (Children Be Afraid) The brutal witch-hunt led to the capture of the acolytes of Mercy Lewis, accused of witchcraft along with John Alden, all processed by Increase Mather at the meeting house, in front of the board of selectmen and the citizens, sedately sitting on benches. The long process saw yet another death sentence. (Ashes Ashes)

Few days have passed since the sacrifice of the thirteenth victim, and the opening of the witches' Malum has led to the rapid spread of a deadly disease. The selectmen gathered in the meetinghouse to deliberate on what to do and, while Mary Sibley tried to manipulate the choices to her advantage, treasurer Hathorne opposed the woman creating a fracture in the Puritan Board. The dispute was interrupted by the arrival of a stranger, Dr Wainwright, who called attention to more practical matters than a stupid political strife. (Cry Havoc) Salem Church was then a place of a conspiracy between Mary Sibley and selectman Corwin, so that the latter took the position of councillor in place of Wendell Hathorne. The whole secret conversation was spied by John Alden, recently returned to Salem in disguise. (Within)

The threats of the recently arrived Countess Von Marburg don't even stop during Mass. The woman, in fact, made a mockery of the weakness of the "other Mary" while blackmailing Mary Sibley, taking part with her son Sebastian to the religious service. To stay on the subject of threats, a distraught and angry Isaac Walton broke into the church during a meeting, holding in his arms the body of his beloved Dollie, and moving accusations towards the Puritans, according to him all hypocrites and corrupted. (Til Death Do Us Part)

The final battle is yet that played between Mary Sibley and Countess Von Marburg, who have an altercation the day after having given corporeal form to the Devil. Mary Sibley said that the church was built with woods of Salem, her woods as Samhain of the Essex Hive, and set fire to the church in order to bring down her enemy. Benches torn, destroyed walls and a fight without rules took place until Anne Hale appeared to extinguish the fire by calling the rain with her own tears. The fight could well have been concluded, but the church is now burnt, an omen of future events which will shake Salem. (The Witching Hour) 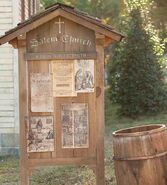 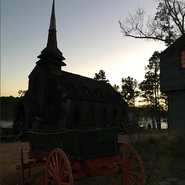 Behind the scenes plans

Community content is available under CC-BY-SA unless otherwise noted.
Advertisement