Salem Jail is a place for the confinement of people accused or convicted of a crime. It consists of a series of small cells located near the public square in Salem, Massachusetts.

Salem Jail consists of a structure that hosts a number of cells connected to a scaffold near the public square, recently restructured and expanded under the direction of Reverend Mather. The condition of the cells - and thus the prisoners - are quite precarious, all largely due to the scarcity of funds used mainly to subsidize the costs of war. The gallows consist of a wooden building which is accessed via a staircase and hosts, in addition to the beam for hangings, a series of pillories.

Throughout the Salem series[edit | edit source] 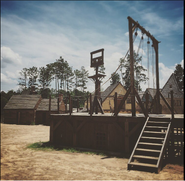 Retrieved from "https://salem.fandom.com/wiki/Salem_Jail?oldid=32945"
Community content is available under CC-BY-SA unless otherwise noted.