Samuel Wainwright was a Bostonian who came to Salem to investigate the mysterious plague outbreak. The doctor was soon enticed by Mary Sibley, and involved in the diabolical scheme of the witches and puritan zealots.

"An English doctor who attempts to discover the town's secrets while he fights to maintain his own. A cold-hearted but quick-witted surgeon whose predilection for sadism."[1]

When he was a child he survived the plague and probably this affliction has spurred him to pursue a medical career. Member of different groups of academics who delight and provide for the dissemination of medical science and to fight superstition. Dr. Wianwright knows personally leading figures such as Sir Isaac Newton.

Described by the authors as "a cold-hearted but quick-witted surgeon whose predilection for sadism", Samuel Wainwright is a man of science, strongly anchored to the logic and not at all intimidated nor superstitions nor fear of the divine as the Puritans. Show a great practical spirit in the most difficult circumstances - as it can be a city overrun by the plague - and also a quite mischievous mind, as evidenced by the speeches with Mary Sibley. When he discovers the actual existence of witchcraft, he remains fascinated, coming to define it a science yet to be discovered, proving to be a very open-minded man for his century. Eager to learn the arcane secrets, he offers himself to Mary as a faithful servant, in contrast to the behavior he showed previously. Indeed, when it comes to satisfying his sexual appetites, Samuel Wainwright is not one that opts for the normal; very well using his tongue for purposes other than disquisitions and debates and preferring the use of ropes and inconvenient situations for a puritanical mentality.

Tall, broad-shouldered, short brown hair and a beard that covers the lower part of the face. Dr. Wainwright has a well-proportioned body, with a hairy chest and broad shoulders. His face is severe and his dark brown eyes are curiously cautious, as befits a scientist. Vaguely reminiscent of Cotton Mather, but with hardest facial features. His clothes are not very sophisticated, but they are still good shape.Mainly he wears shades of brown, white shirts and redingote ranging from black to brown.

Mary and Dr. Wainwright know shortly after the arrival of man in the city and now seem to get along. She sees him as one of the few allies against misogynist selectmen who would usurp her command over the town. The two flirt shamelessly and also have sexual intercourse.

Although their relationship started as antagonistic because of ideological differences (scientific vs theological), the two begin dating very often to find out the cause of the plague by putting together the pieces of the puzzle coming to find that the ditch is now a pit of Hellfire. Although the two have a different background, both are willing to fight the evil that lurks in the streets of Salem.
A relationship barely hinted. While Wainwright believes that the Baron might be a master to teach him the secrets of the dark arts, Sebastian Von Marburg considers the doctor an obstacle to winning the heart of Mary Sibley. Their relationship ended when Sebastian Von Marburg throws Wainwright in the hellish pitch puddle, sentencing him to roam alive in Hell.

A formal and very hostile relationship, since Wainwright considers Magistrate Hathorne a pompous bigot only interested in useless policy. On behalf of Magistrate Hathorne, then, there is not much to add because the two had a little way to interact, limiting all at public or social events.

Dr.Wainwright: "The pox no more discriminates by sex than a lion prefers to eat a man or a woman. Though like a lion, it may take the weakest first. And I have just been to where your weakest reside, in wretched Knocker's Hole. I had hoped to give them more voice here than they obviously have, but I find you all consumed with petty politics. I'm headed back there now to see what can be done."
— Cry Havoc
___________________________________

Mary Sibley: "Tell me, Sir, who are you to speak with such confidence of the pox?"
Dr.Wainwright: "A doctor, Ma'am, with royal certification. I've walked through many poxes. I survived the plague as a child, and I believe I can save all of you. Not by prayer, not by repentance, not by fasting, nor by purging your community of undesirables, witches, or powerful women, but, in a word, by science."
Mary Sibley: "Your arrival here could not be more fortuitous.I think you might be God's gift to Salem."
— Cry Havoc
_____________________________________ 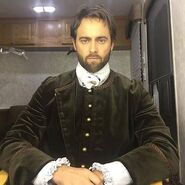 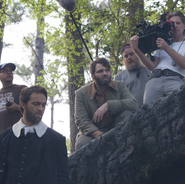 Salem 203 'From Within' Doctor Wainwright

Salem- 204 'Book of Shadows' Cotton and Dr. Samuel Wainwright
Add a photo to this gallery

Retrieved from "https://salem.fandom.com/wiki/Samuel_Wainwright?oldid=35625"
Community content is available under CC-BY-SA unless otherwise noted.