The Grand Rite has been completed, and Mary, Mercy, Tituba, are exacting revenge for tensions raised and mounted toward the end of the previous season. As the witch pox from the Grand Rite begins to claim the lives of Salem's citizens, War is now on the horizon in Salem, as a new enemy arrives from the ancient line of German witches to go head to head with Mary. Who will win the WAR?

Filming on the season began in the fall, and the surviving cast from the previous season have reprised their roles.[1] The writing team for the show had a major overhaul after the first season. Among the first season staff, only Adam Simon, Brannon Braga, and Joe Menosky remained on the show. In an interview with Gavin Hetherington of SpoilerTV, Simon said "there were some very talented writers that worked on season one but they also came from very different backgrounds. They had very strong opinions where they wanted things to go, which was great, except they were telling 13 different stories and I was trying to tell one story in 13 episodes." There were inconsistencies in the writing of episodes due to the sometimes clashing writing style, and Simon further commented that "sometimes it seemed to me that characters I created suddenly sounded very different [in the episodes Adam didn't write], they weren't even speaking quite the same language from episode to episode which was tough on the actors and on the audience."

As a result of this, Elizabeth Sarnoff, Tricia Small, and Jon Harmon Feldman did not return for season two. A new writing staff were brought in, and the three remaining writers from season one were joined by Kelly Souders, Brian Peterson, Turi Meyer, Al Septien - who all had previously worked on Smallville together - and Donna Thorland.[2] 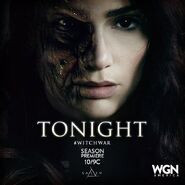 S2.jpg
Mary and Tituba in the premiere

Battle.jpg
Add a photo to this gallery

SALEM LUCY LAWLESS
Add a photo to this gallery

Salem - Season Two Behind The Scenes

Salem- Behind the Scenes Mercy

Salem- Who Wore It Best
Add a photo to this gallery

Ask Salem- Will this season focus on Love, War or something else?

Ask Salem- How wicked will season two be?

Ask Salem- "What was your first reaction to reading the script for season two?

Ask Salem- If you could play another character who would it be?

Retrieved from "https://salem.fandom.com/wiki/Season_Two?oldid=34961"
Community content is available under CC-BY-SA unless otherwise noted.