Sooleawa was an indigenous young woman from an Indian Village, as well as the daughter of the shaman friend of John Alden.

She was portrayed by the actress Cara Santana.

Nothing was known about Sooleawa's early life, except that she was able to speak and understand the foreign language of the settlers, thus acting as an intermediary between settlers and Native Americans, and that at some point of her life she started to learn and practice the shamanic traditions of her people.

Sooleawa was a young woman of gentle and peaceful disposition, careful and respectful of nature, but still willing to practice unknown powers to counter Salem's wicked witches.

Throughout the Salem Series[edit | edit source]

Fortunately escaped from death thanks to the intervention of the Native Americans who fought against the militia, John Alden is slowly recovering in health, thanks to the care of Sooleawa and her father, the village's shaman. Together the three are implementing the plan to persuade Mary Sibley and its witches that John is dead, also helped by Petrus, also known as the Seer. To prevent the witches to use their clairvoyance, Sooleawa crafted several dream-catchers with ropes and twisted branches, dried toads, and feathers. Sooleawa acts as an intermediary between John and the shaman and concluded that witches should be stopped before they awaken the snake coiled underneath the earth. John agrees to undergo a ceremony to tie his soul to the Great Spirit and Sooleawa, completely covered in blood and shamanic paintings acting as a partner in a sexual ritual to seal the deal.[1]

The affection for John seems to grow in Sooleawa, but she knew that the man is engaged in a most important mission steps aside.[2]

Despite the terrible Hell that is about to fall upon the world, the natives continue their peaceful existence. One morning, while Sooleawa roams the fields, she bends down to see a black snake crawling in a yellow flower bush born in the trunk of an old tree. Warned a sudden hazard with a shiver down her spine, she has time to turn around to find just behind her no other than Countess Von Marburg, who pounced on the young girl to kiss her on the lips, thus acquiring information about John Alden and the rituals that have invested him with mystical abilities and protections. Sooleawa's father did not have time to run to the rescue of the girl that the Countess suddenly breaks her neck, while Sebastian Von Marburg appears behind the old man to stab him to death.[3]

The spirits of the two Native Americans are far from being forgotten as they both appear into an almost dying John Alden, inviting him to join them on a heavenly dimension, walking through a valley toward the radiant sun, after Sooleawa has lovingly caressed John's face and hair, awakening him from his unconscious state.[4]

As the daughter of her Native American tribe's chief and shaman, Sooleawa was knowledgeable in her tribe's specific shamanic traditions and practices. She also seemed to be particularly adept in performing rituals that could hinder spells of even notoriously powerful witches - she crafted a particular dream-catcher capable of distorting the so-called "Witch Eye", or clairvoyance. She also acted as a conduit for the spirits during a ritual that allowed John to be blessed by the Great Spirit.

However, as a practitioner of shamanism, Sooleawa's powers were majorly inclined towards respect for balance and communication with the spirits inherent in nature, and therefore non-offensive. Hence, she was an easy prey to the Von Marburg witches and their violence. 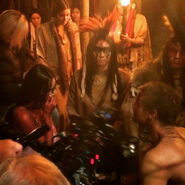 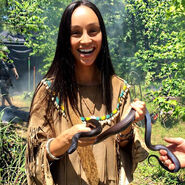 Retrieved from "https://salem.fandom.com/wiki/Sooleawa?oldid=35675"
Community content is available under CC-BY-SA unless otherwise noted.