Comment the episode with us at "The Heart is a Devil" Discussion .

The Heart Is A Devil

The Heart Is A Devil is the second episode of the third season of Salem, and the twenty-eighth episode of the series overall. It premiered on November 9, 2016, on WGN America.

Tituba explains to Mary that she’s stuck in Salem by the Essex tree, and her mission is to kill her son, the devil. Mary goes to Alden and explains that they need to fight the war from different directions. The Sentinel puts Mary’s loyalty to a test. Meanwhile, Sebastian and Anne force Cotton to make a speech at the church to ease the growing panic among the people, and Mercy puts a spell on Hathorne. Marilyn Manson makes his “Salem” debut as the bloody barber Thomas Dinley. [1] 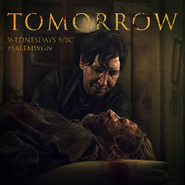 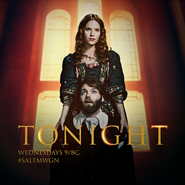 WGN America's Salem Season 3 302 Mary, Tituba and the Witches
Add a photo to this gallery

Retrieved from "https://salem.fandom.com/wiki/The_Heart_Is_A_Devil?oldid=34411"
Community content is available under CC-BY-SA unless otherwise noted.