Comment the episode with us at "The Man Who Was Thursday: Discussion"

The Man Who Was Thursday

The Man Who Was Thursday is the seventh episode of the third season of Salem, and the thirty-third episode of the series overall. It's premiered on January 4, 2017, on WGN America.

LOYALTIES WILL BE TESTED — Anne tells Cotton the great news of her pregnancy but is forced to partake in an unthinkable action that will wipe Gloriana of her memories. While Alden prepares to kill the Sentinel, Mary continues to trick Sebastian into thinking she loves him. Completely “under her spell,” Sebastian tells her that he will find a way to destroy the Boy once and for all where an epic plan of twists and turns unravels and true loyalties surface. [1] 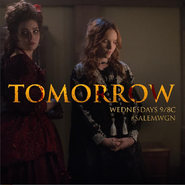 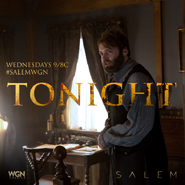 Retrieved from "https://salem.fandom.com/wiki/The_Man_Who_Was_Thursday?oldid=35332"
Community content is available under CC-BY-SA unless otherwise noted.