Mr. Wendell Hathorne was one of the prominent citizens of Salem, Massachusetts. He was a member of the selectmen and later magistrate, replacing the role belonged to the late John Hale. His ruthless façade, however, hides a submissive personality. He was tied to two dominant women, Countess Von Marburg and Mercy Lewis.

He's a recurring character portrayed by the actor Jeremy Crutchley.

Almost nothing is known of his early life. He was born in the Carolinas, where his family owned land and in an unspecified time in his life he moved to Salem. Definitely grown in the most rigid Puritanical dictates, he revealed to have never tolerated Magistrate Hale's policy, considering it too liberal. In addition, Mr. Hathorne has always secretly envied Magistrate Hale's social position and wealth.

Selectman of Salem, Mr. Hathorne is a man who embodies the quintessence of Puritanism. Misogynist, contemptuous of those who do not conform to his ideal of conduct, looks like a true religious fanatic who attributes the origin of the disease to a divine punishment. Hathorne is also a hypocrite manipulator, greedy for wealth and lust, who indulges in comments and sexual innuendo in conversation with his friends at the tavern. Hathorne is also an expert orator, able to enchant the crowd with his speeches steeped with biblical references.

A tall man with a clear complexion and iron-gray hair. Dressed in black from head to toe, wearing leather gloves and carrying a walking cane while it is clear that he has no problem to walk without the support of the cane.

Hathorne and Mercy began a deviant role-play liaison that resulted in a long-term relationship, crowned with a marriage celebrated by Cotton Mather himself at the Bird's Nest. Despite it all started with Mercy's goal of becoming the most powerful widow of Salem, the two were killed after experiencing true love with each other.
Mr. Hathorne is a tough cookie, hindering Mary in her domain of Salem. Extremely misogynistic, he cannot stand to be commanded by a woman, and many times he challenges her face to face but always lose miserably because Mary laid on him the guilt of misconduct and that he was unable to carry out his selectman's tasks. Hathorne takes revenge against Mary by secretly allying with the Countess Von Marburg. After having stripped Mary of her social position, the new magistrate of Salem sentenced her to shame.
Mr. Hathorne aims to achieve the role of the magistrate of Salem and decided to take possession of Anne Hale's assets, going as far as to threaten the young woman to accuse her of witchcraft if she would not accept his courtship. This desire to possess the young woman comes in a rivalry with the Rev. Cotton Mather, who also loves Anne Hale but, unlike Hathorne, he is reciprocated.

Mr. Hathorne: God has given us a clear sign that we have offended him. A pox on all our houses. Now we must do whatever is necessary to win back the Lord's favor. I am quite certain what God is most displeased with. But what is a surer sign of a world turned upside-down than a world with a woman on top? We have utterly upended the most fundamental principle of how things are to be, which is led by men. Men of property, men of substance, men of godly goodwill. But above all, by men.
— Cry Havoc
_________________________________

Mr. Hathorne: Surely God does not intend his flock to perish at the hands of devil worshipers and plague. Instead, I believe these are omens sent from the Almighty to tell us we must all leave Salem to continue our exodus south to the Carolinas, to a land which was settled and owned by my family for two generations, where the soil is fertile, where a Puritan man may plant his seed and watch his family grow. Our promised land awaits. And so, humbly, I stand before you, divinely called to be your Moses and lead you there! George Sibley was a giant in his day, but the sun has set on that day. And if it is not to set on all our days, we must have a new leader. I ask you this simple question did God intend you to be led to the true promised land by a man who cannot even walk?
— The Wine Dark Sea
_____________________________________

Mr. Hathorne: Pride goeth before a fall! How far indeed this Jezebel has fallen! From first wife of Salem to painted whore! Now, now! Did she kill George Sibley? No! But as his life force dimmed, she forced our founder to watch as she entertained her lovers in his own marital bed! And when our last founder finally mercifully passed to Heaven, one can only imagine how she and that corpse-botherer, Dr. Wainwright, disposed of the body. Leaving so many questions. Where is Dr. Wainwright? Fled in shame? And how many other men did this siren lure into Mr. Sibley's bed? As magistrate, I hereby strip you of all your ill-gotten gains. Indeed, of the very name Sibley itself. What, then, shall we call you? Mary Walcott? No, I would not demean your father's name and memory. No, with no man's name, you will just be plain Mary, like the plain, worthless woman you are.
— On Earth as in Hell
_______________________________________

Mr. Hathorne: Even the village idiot knows a harlot when he sees one. In time, some poor man may be willing to ignore your transgressions and marry you. Decades of toil await you. Toil and, if you're lucky, the birthing of brats, one of which will likely kill you during labor.Hm.In the meantime, that most generous of gentlewomen, the Countess Marburg, has put up a bond of surety for your release. Use your freedom of movement wisely, Mary. Or it'll be the gallows next time.
— On Earth as in Hell
_________________________________________ 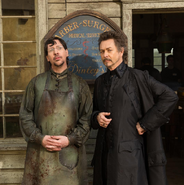 Retrieved from "https://salem.fandom.com/wiki/Wendell_Hathorne?oldid=35653"
Community content is available under CC-BY-SA unless otherwise noted.