The Salem Wiki
Register
Don't have an account?
Sign In
Advertisement
in: Magic, Object, Witchcraft,
and 2 more

To change and control reality through supernatural means

Witch's Tools are common objects taken from daily life and/or nature and empowered with magic, employed to carry out a specific task, generally with negative purposes.

The practice of magic requires the use of certain tools that can look like regular kitchen utensils to a profane eye. Although the most powerful witches, due to their ancient knowledge and experience, don't need to resort to elaborate rituals requiring particular items or ingredients, the use of physical objects helps the witch to focus her intent. A witch can use any object in her Craft, but the following are considered essential.

A Book of Shadows, also known as grimoire, is a journal documented with magical recipes, rituals, and spells as well as personal thoughts, goals and opinions. With the right spell, only the owner can read the contents.

A block of solid wax with an embedded wick that is commonly lit to amplify a witch’s spell. Candles are one of the most basic tools used by witches in various rituals and spells. Several spells and rituals require the use of candles, which are sometimes required to be of a certain colour, or smeared with hair, blood and herbs.

Crystal stones similar to amethyst or another kind of quartz stone found by Increase Mather in a secret compartment in Mab's office. They are probably used to practice divination or for casting spells, hence their name. The stones, hidden in a little cloth bag, were hidden along with other witch's paraphernalia.

A large metal pot that is commonly used to hold various ingredients for elixirs and potions. Actually, any kind of pot used to brew potions and incenses may be considered a cauldron. Tituba and Mary used a copper pan to dry the hand of a fellow deceased witch, Corwin, and thus create a fetish. A similar purpose is that of the cup - or goblet - that is used for collecting liquids and beverages, but also the blood of sacrifices during rituals. An important cup is the one used by Sebastian Von Marburg in the consecration of the vessel, to represent the witches' union and the Earth womb.

A double-edged blade that is commonly used to perform spells and cut herbs or affect the flesh during sacrifices to shed blood. An important dagger is that used by Baron Sebastian Von Marburg during the final stage of the Grand Rite to collect the witches' blood in a blessed golden cup.

Plants and roots have been known for centuries for their medicinal properties and witches use them to brew their potions and perform their rituals. Collected under certain astrological influences, each herb has a certain property crucial to the outcome of the spell (i.e. Valerian root shields the owner from any malevolent spell). Plants named in the show are, for example, Agrimony and Valerian.

A Familiar is a lower demon in the guise of an animal, given by the Devil to witches after their Initiation into Witchcraft so that it assists them as a trusted companion, servant and spy to perpetrate misdeeds. Although they are living beings, for the witch can be nothing more than a tool, a constant supply of blood for sacrifices.

A witch can use any object owned by a person to cast spells or curses. While it is preferable to use body parts like nails or hair, jewelry or clothing can also be used. Magistrate John Hale used different items such as rings, tooth, coins and jewelry to blame Isaac Walton as a witch. According to Reverend Cotton Mather, witches use parts of corpses in their spells and potions. This turned out be true when Mary and Tituba used the severed finger of Alexander Corwin to manufacture a kind of Hand of Glory. Since steal body parts from town graveyard would be problematic, witches steal from dead bodies thrown into mass graves in the crags, as shown by Mercy Lewis when she used a rib to create a knife.

A poppet is a small figure, made to represent the distant recipient of magical working. Often these would incorporate such things as hair or nail clipping to strengthen the connection with the victim. Poppets may be made of different materials like wax, cloth, porcelain. To create a poppet a doll must first be crafted then baptised in the name of the target with specific rituals and they should be placed in the vicinity of the person who is the target of the spell; for example, it can be hidden in his or her bedroom. Mary Sibley sewed a doll filled with ingredients such as mouse blood, chopped cockroaches and poisonous weeds to cast a hex on Anne Hale. Noteworthy is John Hale's collection of small figurines similar to tribal fetishes, obtained during his travels, and placed on a shelf in the living room of his house.

Witch's shaft is a dark wooden stick used to arouse sexual pleasure to the nether regions of a witch during a ritual of sexual magic, to collect enough energy from lust in order to exploit it in difficult rituals like the one that creates an astral projection. Powerful witches as Countess Von Marburg seem to be able to perform these spells without resorting to this "rudimentary" tool.

A deck of playing cards with the addition of 22 picture cards depicting esoteric iconography created during the Renaissance in Italy and spread throughout Europe, especially in France, where they were used to predict the future. Sebastian Von Marburg is shown with a Tarot deck in Mary Sibley's boudoir during the episode The Beckoning Fair One, although Mary has never been shown to use tarot cards before.

Peculiar items and resources used to increase magical power or to carry out specific rituals are listed below. These tools are apparently unique in their kind and some are considered as sacred objects. Among the sacred objects are also the relics needed for important rituals, such as the Grand Rite to consecrate the earth awaiting the rise of the Dark Lord.

Clock of the Doom

Main article: Clock of the Doom

The Clock of the Doom is a bewitched orrey, a complex instrument that measures and regulates the movement of stars and planets. It was used by Mary Sibley to calculate celestial movements conducive to the steps of the Grand Rite.

The Malum was an ancient relic in the shape of a golden apple used to cleanse and consecrate the Earth by spreading a supernatural plague, a key-object to complete the Grand Rite. The Malum is kept in an inlaid box, a kind of Pandora's box used to unleash indescribable horrors.

The Traveler's Mask is a mysterious artefact in the shape of a mask that allows a witch to teleport to any location she desires, especially the wilderness. It was a peculiar tool of Hale witches.

Valerian Trinket is a necklace with a pendant filled with valerian root that protects its wearer from the magic of the witches. In witch lore, Valerian is a powerful herb believed to possess the power to protect against black magic and to enhance the power of a particular spell or ritual.

Water charm is a small horn-shaped glass vial enchanted to act as a magical warning sign. This vial, containing part of the water used as a conduit for a specific spell, is a great system for keeping track of the sign left by a witch's spell.

A witch knot is a "Monkey's fist" fashioned knot frequently used in weather magic spells to halt the winds favourable to navigation, thus causing a shutdown of navigation on the high seas, shipwrecks and other similar problems. An example of its use is that employed by an unnamed German witch who, in accordance with John Hale, has delayed Increase Mather's travel by stopping the wind with a bewitched ligature. Knots can also be used in sympathetic magic, using laces and strings to magically tie and choke the victim of the spell. An example is given by Mary Sibley who has remotely tighten Increase Mather's cilice by tightening the laces of her own corset.

A rotting hand inscribed with gliphs

Anne Hale with her traveling mask 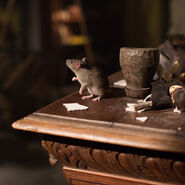